Skip to content
A couple of years ago I went on a trip to New York and hunted down a tiny fabric and yarn store called Purl. You may have come across their inspiring blog. It has since moved to larger premises but the old place I visited was floor to ceiling with beautiful fabrics and notions. I bought some fabrics and congratulated myself for having found that tiny little store in the middle of that large, busy city on the opposite side of the country. When I got back to California someone told me that Purl has a distribution warehouse right here in Orange County and what’s more, it’s open to the public. I kind of wished they had told me that BEFORE I flew all the way to New York, but nevertheless I was delighted and have been a regular at the warehouse ever since.
On a recent trip I bought a couple of these purse frames (actually I think the ones I got were bigger than this but they don’t appear on their website).

These frames come with a pattern and instructions which are written in Japanese. I don’t speak Japanese. Nor can I read it for that matter, but I have made lots of purses like this before, on a smaller scale, plus I am prone to the occasional bout of intelligent thought once in a while, so I had a go and this is what I made. 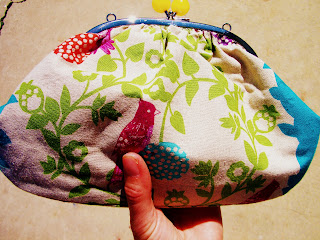